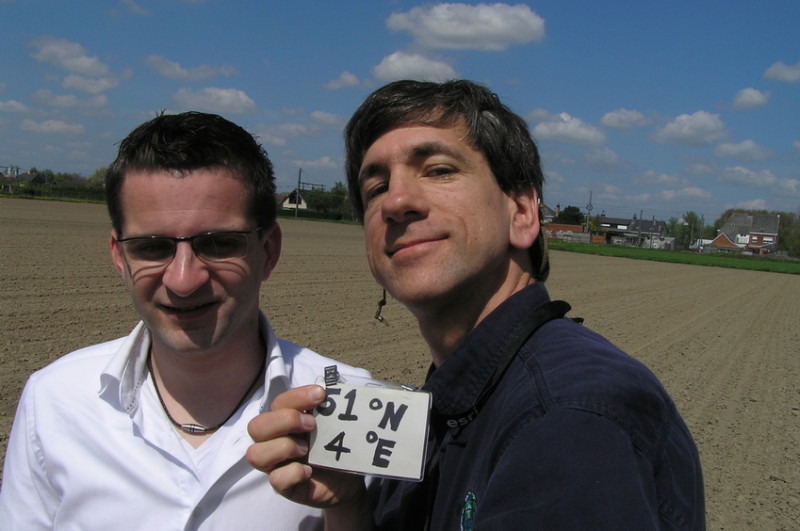 Traveling to the point where the North and East coordinates are a exact round number: it may sound strange for a lot of people. But after my first visit to such a confluence point I have to admit, it is actually a whole lot of fun!

With thanks to Joseph for the text below, which can be found at confluence.org also:

“To non-geographers, two people meeting for the first time and choosing the middle of a field in what most would consider to be the “middle of nowhere” might be odd. But to us, it made perfect sense. Actually, due to our correspondence over the past few months, we knew we had much in common with regards to geography, education, and geotechnologies, so when we did meet at the train station in Gent, we felt as if we were old friends. We converged from different directions–me from Bruges, Dennis from The Netherlands. It was a sunny day and a beautiful one for confluencing.

Due to a few factors, one being a train derailment on the very line we had intended to take to the Schoonaarde train station, we found ourselves on a bus eastbound out of Gent around midday. The bus took us around the point of the derailment and it was still a grim and dangerous situation. We were hoping everything would turn out okay for the townspeople. The bus had wide windows which was great for geographers who were not from Belgium to see the villages and fields. Ten minutes later, we were the only people disembarked at the Schoonaarde train station. It was a bit of a lonely but lovely spot and a fine day – brightly sunny with a small breeze blowing. In fact, weatherwise, it was the nicest day of the 10 days I was in Belgium, about 20 C (69 F). We enjoyed discussing all things Geospatial and taking photographs as we walked along. We also discovered that we both liked the photographic perspective that comes from lying down or crouching very low to the ground. We walked west along the road the bus had recently taken us, and then cut to the back of the lots and continued along the railroad track until we reached the back lane. At nearly 4 Degrees East Longitude, we chose our way very carefully along the edge of tall grasses at the border of a field of soil that may have been recently planted or at the least, recently ploughed. We reached the confluence point with nearly 12 satellites in view about five minutes later.

The confluence therefore lies near the eastern edge of the newly planted field, with fair views in all directions. The confluence lies on flat ground. The temperature was very pleasant under clear skies with a moderate breeze. We saw a few birds but no people or animals. This was my second day in Belgium and I already had two confluence points to show for it. This was Dennis’ first confluence visit and my first time to stand on 4 East. I had visited 51 North a few times before, aboard a boat on the English Channel and also the day before at 51 North 3 East.

We spent about 15 minutes at the site taking videos and photographs. Then before we left the area, we took a few photographs lying down in the grassy field and along the railroad track a few minutes later. We walked back to the train station and were pleased to catch a bus only about 20 minutes later. Taking this back west, we passed the derailment site again. Once in Gent, we parted ways, with the confidence that these two geographers would see each other again someday. I took the train back to Bruges and Dennis drove back to The Netherlands. A fine way to see the countryside and more importantly, to make a new friend.”

This site uses Akismet to reduce spam. Learn how your comment data is processed.