Long story short: i’m a Geography teacher and an Twitter addict. When I started teaching those two didn’t worked out together. I was sharing a lot of personal stuff on Twitter. Stuff that shouldn’t reach my pupils, like where i’m hanging out, with who and what whe’re doing.

Traditional teaching is a lot about teaching a whole group of individuals at once, so called group education. But there are always pupils who have questions of there own. Sometimes about the subject the class is about. Sometimes more personal stuff. To give them the attention they need and deserve a teacher have to find additional and creative solutions. Mostley that means having a chat in the daily breaks, after the last lessons or just a couple of minutes between two lessons. So far so good. But not all of those questions require a face-to-face contact. That’s where internet comes in.

As you can see in the picture above, there are still pupils who have unanswered questions that where not answered in the situation of the first picture. Sometimes because they weren’t able to get the attention they needed in the classroom, sometimes because there question came up after the class.
That’s where digital communication by email comes in. It gives the pupils the change to get in touch with there teacher at any time, and give the teacher the possibility to answer whenever it suits him or here best. Which is represented by the next image. So far, so good. 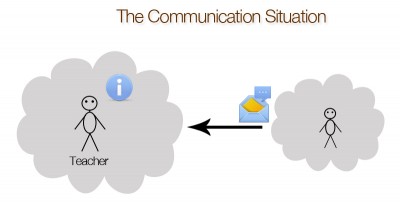 Twitter can be considered as ‘mass-media‘, meaning it reaches a large audience. Speaking in terms of pupils and schools, a large audience would be tens of pupils. And after using Twitter for more then two years I can say it does reach those numbers of pupils. Twitter, for me, is a way to not only receive information from the pupils, but foremost a way to send information to a relative large group of pupils. For example: when I corrected there work, i’ll let them know there grades are available in on the (private) website of the school. Within a couple of minutes they spread the message, through there own communication networks like SMS and chat.

In addition, Twitter can also be used to just get a little notice of what kind of things are happing in there world. What subjects they talk about, what kind of activities they’re doing. It’s not like the teacher is spying on them like big brother, or correct them when they Twitter inappropriate stuff. It can be more like a tool that helps the teacher to understand what’s going on in the pupils perception of the world. And that’s one of the things that the teachers of today are doing, besides teaching. Trying to understand what’s going on in the lives of pupils, and helping them understanding and shaping the world around them. 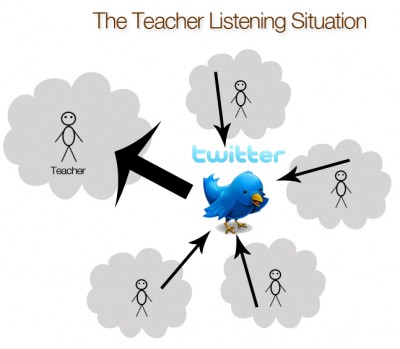 In addition: i’m not saying every teacher should and could use Twitter. There’s should always be a very good division between teachers private life’s, and the private life of the pupils. If you don’t fully understand the possible traps of Twitter I suggest you don’t use a public Twitter account. It’s like chat programs ten years ago; most of us know the stories about how that went wrong for some teachers.

This site uses Akismet to reduce spam. Learn how your comment data is processed.